Creating a business or a job

We’ve all heard the terms Entrepreneur, Business owner, even labels like solopreneur, Mumpreneur or Entrypreneur, but is there a difference in what they do?

These labels are merely indicators communicating the person’s position in a market, but what job they do is all the same. How they do that job is the thing that is different, however, these (usually self-titled) have more to do with esteem sensitivity and how a person wants to be perceived than the way they actually do their job.

The system we used to build a team to open around 100 franchise outlets over the last 20 years still works today to scale up a business, and the same system can for business owners to get help. The Eisenhower Matrix, also referred to as Urgent-Important Matrix was used to build teams of 15 people to open a store (mostly food outlets), but was also used to open larger outlet with 100 employees.

The order we training the staff in depended on if the owner had a strength in doing urgent or important work, and the first supervisor we would employ to help them had the opposite strength. While we had to do this in around 8 weeks, most business owners take around 5 years to get to this stage. 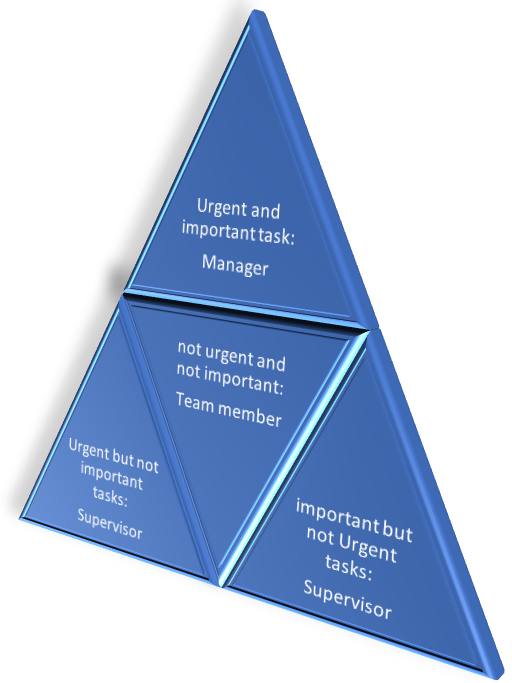 We found that is a new franchisee employed someone that was “like them”, they like doing the same work, so it became a competition and the franchisee would put an unrealistic expectation on the supervisor to show them “no one can do it as well as me”. This meant the supervisor would be unhappy as they were delegated all the jobs they didn’t like and would not last long in the position.

The supervisor was key to propping the owner up but also held the team together as this diagram shows.

When someone says “I work for myself”, here’s a news flash for them – you always work for someone else when you are in business, it is simply that they get to choose the work they do. You can do that as an employee too. People that have high technical skills get to pick and choose what work they do all the time.

Steve Jobs said, “you don’t employ smart people and then tell them what to do”. Steve may have been referring to himself, but how often do you see a small business owner do that.

This is not without consequence. If you don’t meet the needs of others, why should anyone pay you for it? Because it is interesting to them? People that do that job are called “Actors”.

The answer to what may seem a complicated situation is a simple one. Employ someone who is not like you first. You have a lower expectation, and they are more likely to want to do the jobs you don’t like. It is a win-win. Unless you are just looking for validation that everyone should do things your way, but that would seem a little too narcissistic to most people.

In my experience, the simplest contrast I’ve heard between Entrepreneurs and business owners is that Entrepreneurs develop solutions for problems, whereas business owners have products and services that can solve problems. Essentially, they work with each other (more so than for each other) to prioritise task to meet the customers’ needs and wants. The more wants meet, the more money both sides make.

When prioritising tasks, managers (including business managers and owners) must focus on things that are urgent and important to achieve the organisational goals, but what if the manager gets too busy and things start to get out of control?

The Eisenhower Matrix, also referred to as Urgent-Important Matrix, help you decide on and prioritize tasks by urgency and importance, sorting out less urgent and important tasks which you should either delegate or not do at all.

Maybe they need an assistant to help, but who to choose, and what tasks can be delegated to the assistant? If you could get around to the issues sooner, would they still become urgent, or would you love more time to work on them? Well, the answer could be found in setting up a succession plan.

If you are looking for an assistant to support your team, start with the skills of the staff you already have in your department, and see if you can reward them for their great work.

Two options may stand out:

In the first case (point 1 above), you can give them the urgent tasks that are not important, because if they mess them up, it’s not a big deal. If it becomes a problem you can usually fix it and you don’t have to start from scratch (so it saves you some time), but If they do get it right, it saves you doing it.

In the second case above (point 2), the supervisor can look after the important but not urgent items, and can spend the extra time on it that you wish you had. You have the time to fix it up if they don’t get it right, or you can jump in and help (if you get time) to get it done faster than you could on your own.

The answer to the above questions could be you need two assistants. In both cases, you have factored in acceptance of failure as part of the learning process, and fear of failure is often a reason good workers don’t make the step up (they don’t feel they will be supported, and may even lose a friend). Maybe after 6 months, you swap the tasks delegated to the two supervisors to see how they perform when placed out of their comfort zone, and if they do go well, start planning your holidays!

This raises another issue for the manager:

The simple answer when an effective succession plan is in place is no, but the manager can take holidays without having to worry about things falling apart or take on extra responsibility. The other benefit is that it is likely that your boss has more things they would like to get you to do (so they can go on a holiday!), so you can develop your skills and knowledge.

This will increase your value to the company, and ultimately make you more employable if you feel your efforts are not being adequately rewarded and you wanted to leave. At the end of the day, you get a win out of it. If you have put yourself out of a job, you could now move into a better one.

So why not be selfish, and create a succession plan for your staff, and you can also use these delegation skills to build a team over time. Who you put on first will depend on if you have a preference to doing urgent or important tasks yourself, and the first team member (the 2nd person in your business if you are a solopreneur) should have a strength and a preference for the opposite. If you both like the same things, it is more likely you will compete for work of if miscommunications occur you end up doing the same things (and neglecting others).

If you have a business focused on quality, you will likely to have a preference to focus on the important tasks as a 2nd option (if there are no task that are both urgent and important). You are likely to want to focus on the urgent tasks (and sales growth) as the 2nd option and may jump in and take over from your team members and appear like you don’t trust them to do the job.